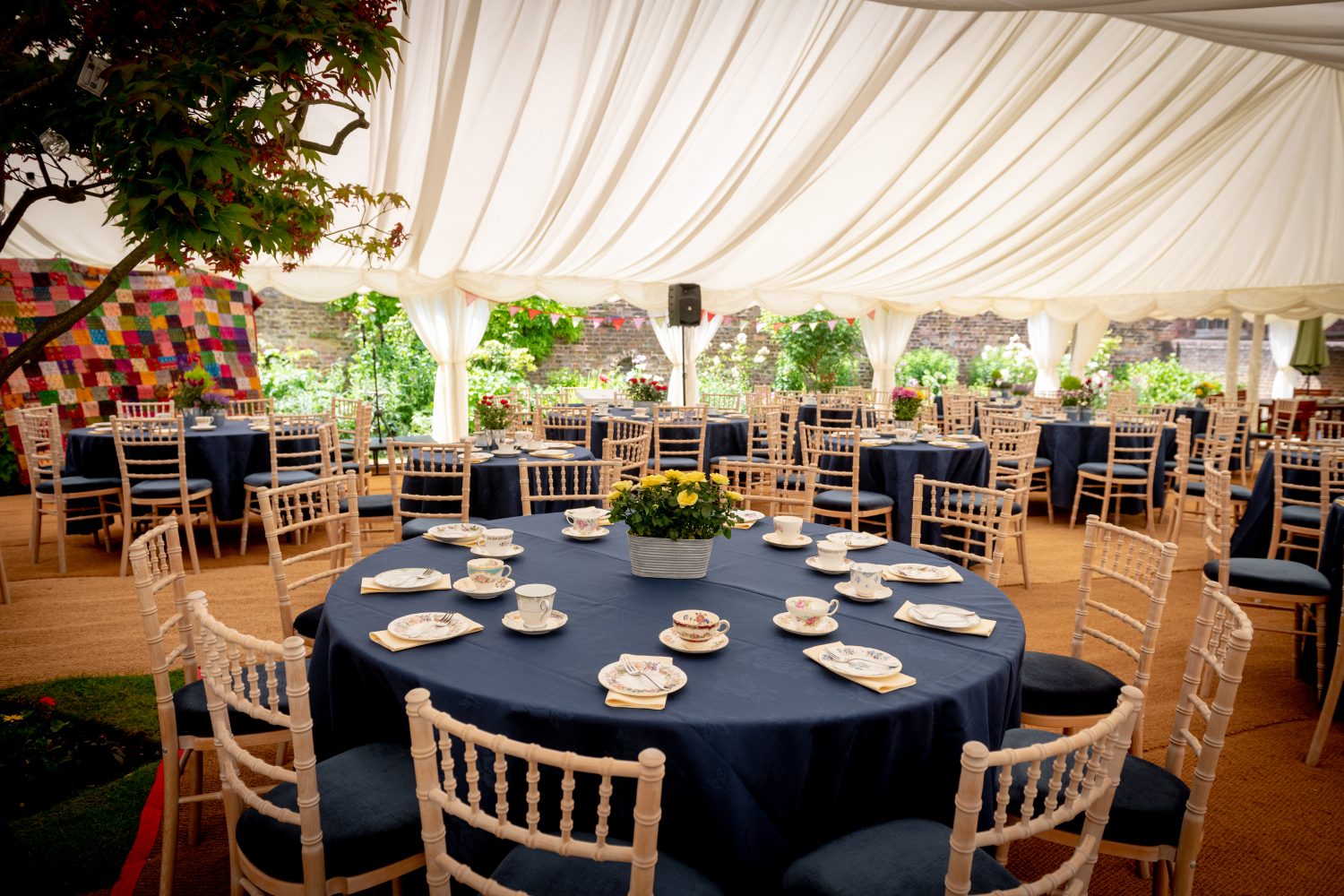 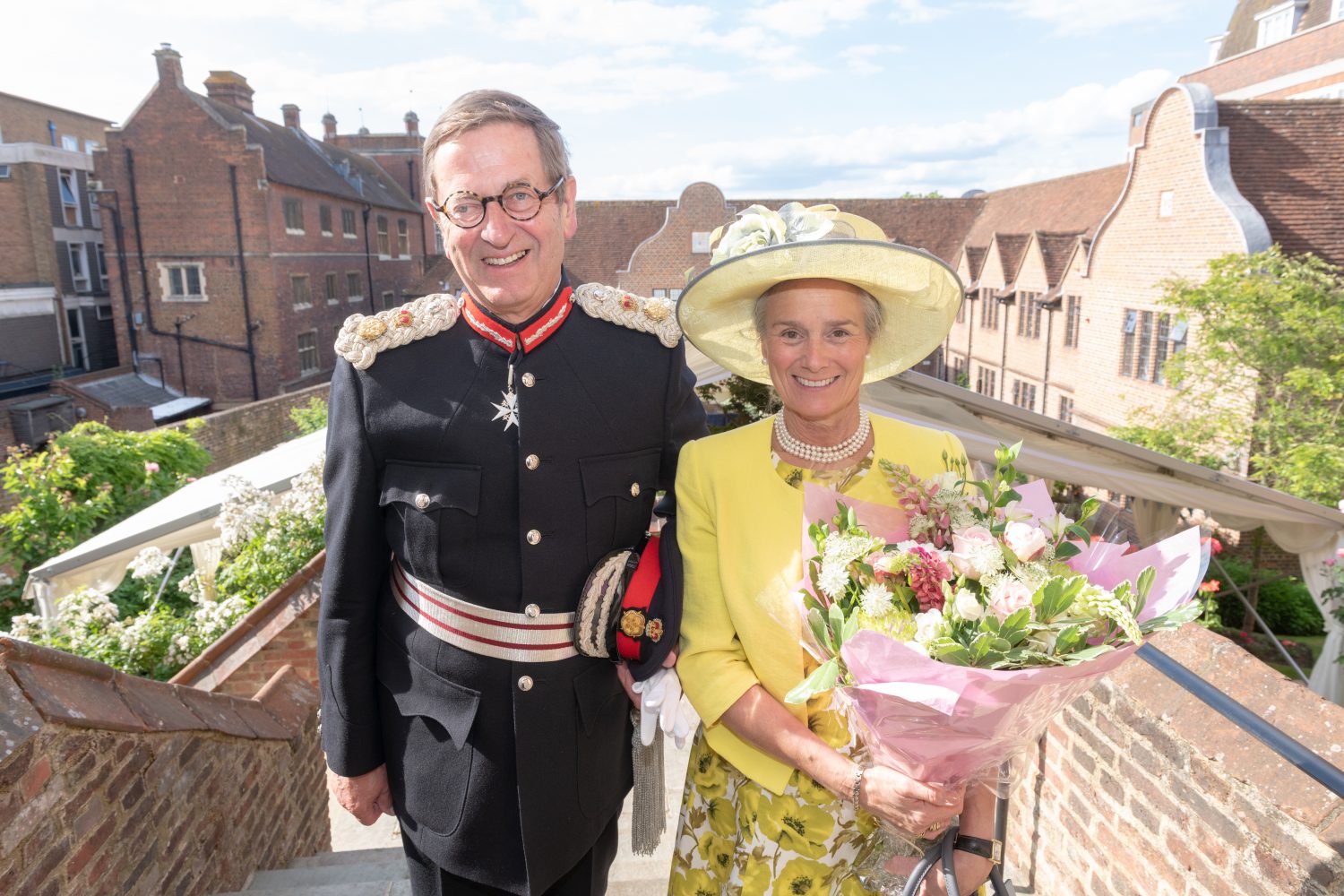 Reverend Robert Cotton welcomed residents, governors, guests and the community to a very special Choral Evensong at Holy Trinity Church on Sunday 17th November.  The deeply moving occasion marked the founding of Abbot's Hospital 400 years ago.  Tributes were made to our Founder, the late Archbishop George Abbot, and resident Valerie Charles was invited to lay a wreath on his tomb. 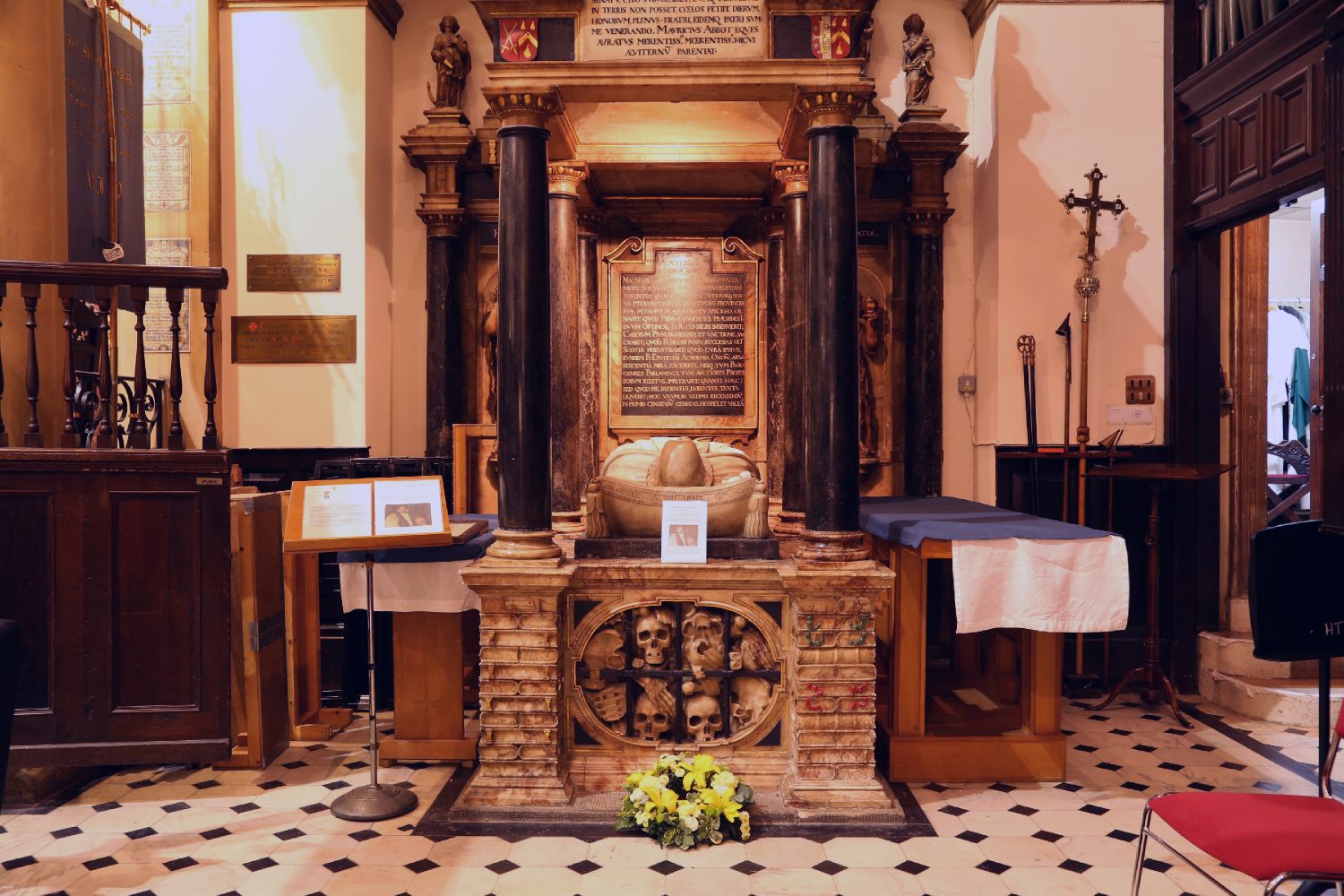 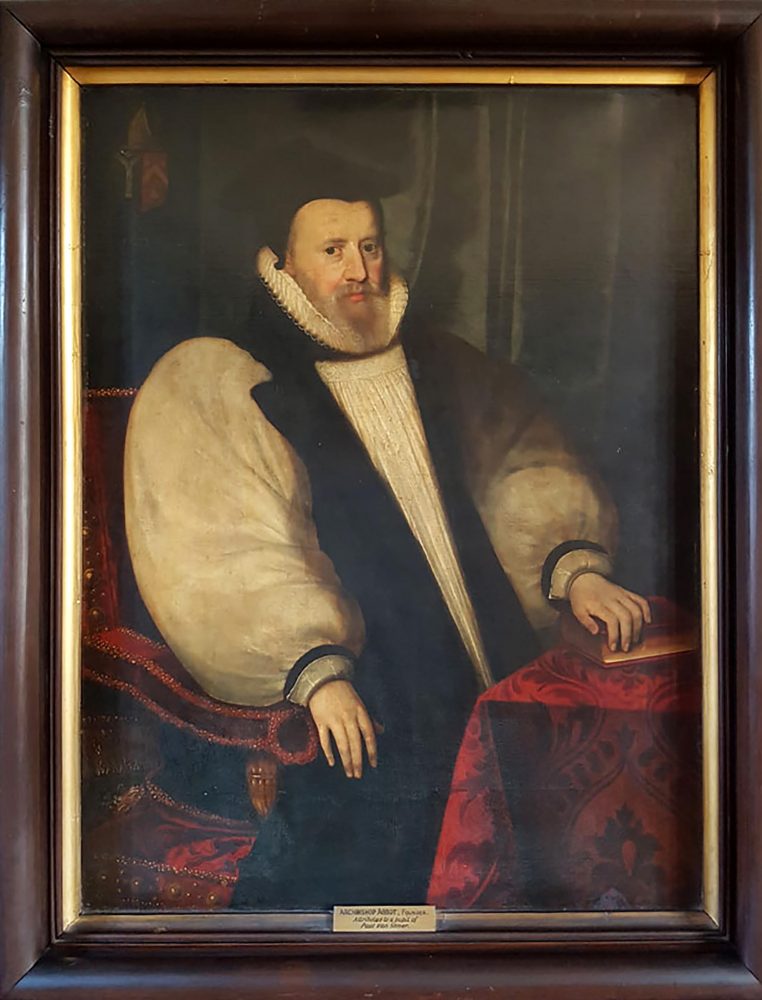 The 400th Anniversary year of Abbot's Hospital was celebrated with our exhibition 'George Abbot's Gift to Guildford' at Guildford House Gallery.  Viewers were able to discover more about George Abbot, former Archbishop of Canterbury, and the wonderful legacy he left to the elderly people of Guildford in 1619.  Featured some of the Abbot's Hospital treasures that are not usually on public display and a short film made over the summer was also shown.  The date running was extended to 2nd November 2019 due to popular demand and family days and group tours were arranged.

Jacobean costume drawing.  Suitable for children of aged 4+.  Enter our drawing competition with the chance to win a teddy bear from The Bear Garden.  The winner will receive watercolour pencils (suitable for ages 3+) and the winning entry will also be exhibited. Further details to follow. Great fun!  Children must be accompanied by an adult.  Jane Allison, portrait artist, will be popping in to meet everyone.  A great way to learn new skills and develop your artistic talents!  No booking is necessary and drawing materials will be provided.

The Master and governors hosted a private celebratory anniversary lunch party at Abbot's Hospital for residents and guests on 22nd October 2019. The wonderful occasion was a lovely way to mark the 400th Anniversary since the founding of Abbot's Hospital.  The Gaudy lunch party were joined by special guests The Earl of Onslow and his wife. Tributes were paid to the late Archbishop George Abbot.

Abbot’s Hospital was included on the  Guildford Shakespeare Company (GSC) ‘Sonnet Walks’ tour over the weekend of the 27th /28th April 2019.  The tour was very successful and generated a great deal of interest in the Hospital.  A wonderful day.

A Large Garden Party was held on Saturday 22nd June 2019.  Residents were able to invite up to 4 people (family) to  tea and cakes in the lower quad area. Governors and Staff were also  invited to this delightful occasion. The Lord Lieutenant of Surrey unveiled Jane Allison's painting of residents who are currently residing at Abbot’s Hospital.  The portrait was hung in the Common Hall at Abbot's Hospital. 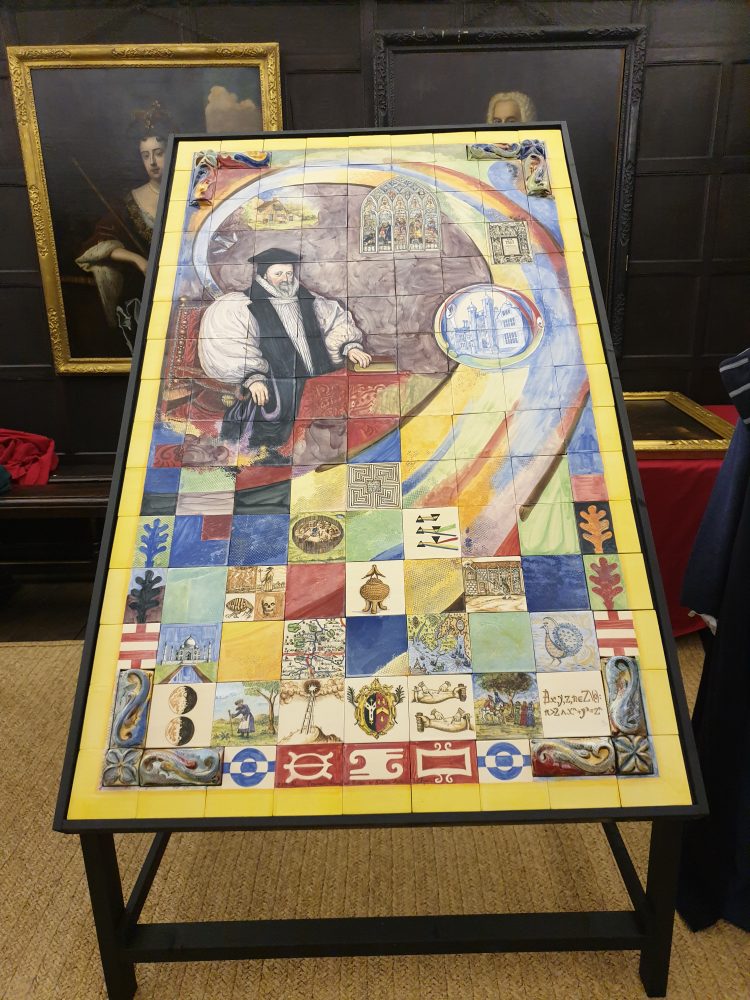 unveiled last Monday in the Guesten Hall. The tiled panels form part of a set of 4 and were created to mark the 400th Anniversary year since Abbot’s Hospital was founded in 1619 as a place of refuge for the elderly people of Guildford by the late Archbishop George Abbot.

Husband and wife team Liliana Montoya and Carlos España of Aluna Ceramics Studio designed the panels with the assistance of a grant from the National Lottery Heritage Fund. Ms Montoya and Mr España were chosen last spring to lead and deliver the Abbot’s Hospital Memorial Community Arts project. The art-educators and ceramics specialists have created 4 eye-catching designs that will be installed at a location in central Guildford next year. 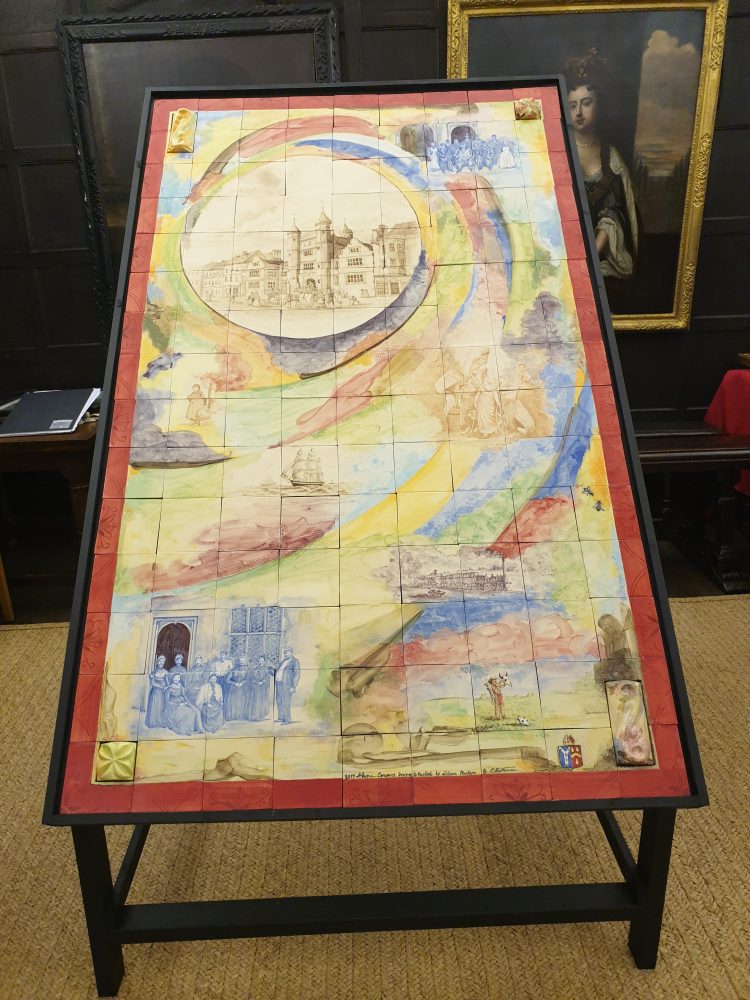 Each panel depicts the history and local community involvement of Abbot’s Hospital over the last 4 centuries. Ms Montoya and Mr España worked with the Abbot’s Hospital residents and students from Wey Valley College and George Abbot School on design concepts and the children helped to create some of the tiles.

Mr Keith Childs, a recently retired Governor at Abbot’s Hospital, was delighted to unveil two of the wonderful panels in front of 45 Guests. The occasion is a fitting tribute to mark the culmination of the anniversary year which included a number of successful community events, including an exhibition at Guildford House Gallery and a short film.

The colourful tiled panels will go on public display in central Guildford early next year.

'George Abbot's Gift to Guildford', our 400th Anniversary Film made by Chocolate Films over the summer, has now been released.  The subtitled version of the film is available to view here: 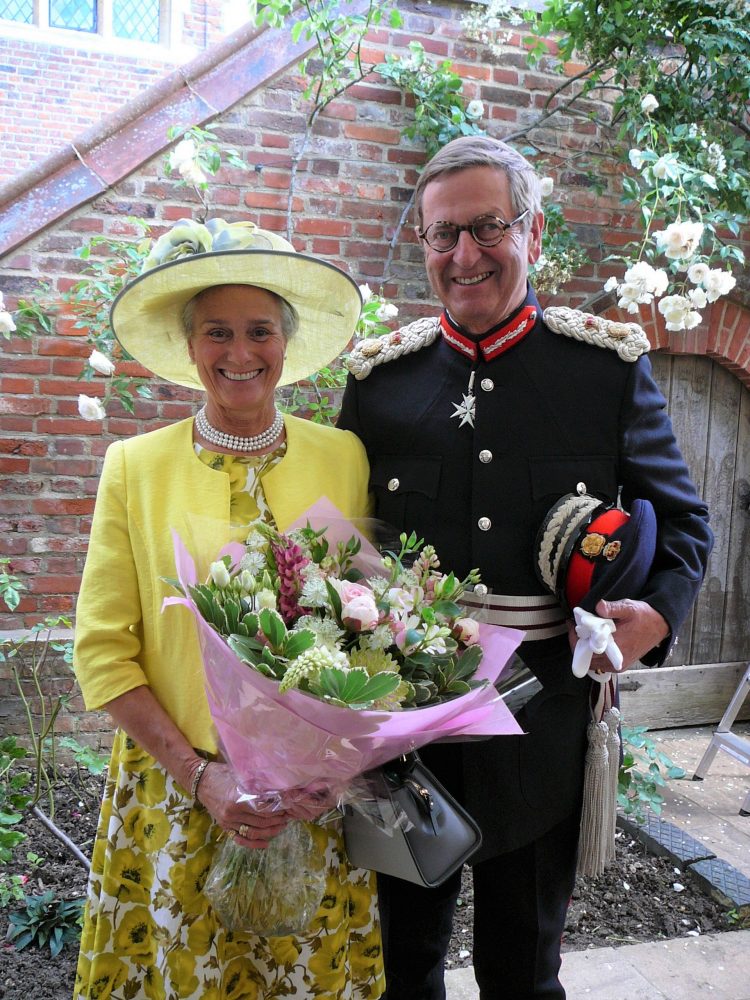 The 400th Anniversary year of Abbot’s Hospital was celebrated on Saturday 22nd June with a garden party for residents and their families within the picturesque walled garden.

Mr. Michael McKechnie, Master of the Hospital, joined the governors to welcome families and friends to the party, which included a three-piece jazz band.  They were joined by special guests the Lord-Lieutenant of Surrey Mr Michael More-Molyneux, his wife, Mrs Sarah More-Molyneux, the Rt. Hon Anne Milton, MP for Guildford, the Mayor of Guildford Cllr Richard Billington and the Mayoress, Lynda Billington.

Speakers paid tribute to the late Founder, Archbishop George Abbot, whose vision and foresight has provided the elderly people of Guildford with homes since its founding in 1619.

The Chairman of Abbot’s Hospital gave a touching speech, thanking Mr. McKechnie and the Warden, Nicole Clemaron, for their tireless work in looking after the residents and the building.

The Lord-Lieutenant of Surrey explained that over the course of 400 years Abbot’s Hospital has been through a lot, including surviving two world wars: “Definitely the finest building in Guildford,” he said, “the ideals and objectives are still the same as 400 years ago.”

We have been awarded our Heritage Lottery bid money and, as a result, the Governors have taken on a Heritage Engagement Officer and an Archive  Research Consultant who are responsible for heritage research and delivering heritage events, public relations and marketing during the 2019 Anniversary year.

Their roles encompass: the delivery of the Exhibition at Guildford House Gallery, a 400th Anniversary film, tours, workshops, outreach to the public and the overall smooth running of the “400 Years of Abbot's Hospital” project.