While Abbot's Hospital is able to meet its annual running costs, most years see additional areas of expenditure related to the upkeep of the building or the provision of facilities for the residents. In practice, these projects cost an extra £100,000 pa - for which funding must be found.

The Clock Tower and the Pity Bell

In 2009, just when we believed that building work was at an end, a routine inspection of the roof revealed that the wood and lead supports for the bell tower housing the Hospital Clock were in need of replacement. At the same time, the housing for the Pity Bell, installed to enable weary travellers to summon help from a Senior Brother, was declared unsafe and removed for repair. 2 grants were secured to repair the Pity Bell housing but no such help towards the £25,000 needed for the bell tower has yet been forthcoming.

These extremely rare and significant examples of 17th century painted enamelled glass were in urgent need of attention in 2012. Monitoring of the glass finished in early 2012 and Abbot's paid £80,000 for a full renovation to the Chapel stained glass windows. The full £80,000 cost of this was very generously funded by donations.

In 2010 the lift which connects the rear building with communal areas in the original part of the Hospital ceased working after 25 years. A specially manufactured part was obtained and repairs costing £19,000 have now completed.

The main boiler, used to heat the communal areas of Abbot's Hospital and 3 apartments in the Grade 1 listed building were in urgent need of replacement. 2 new combination boilers and upgraded control systems improved our energy efficiency by 20% and reduced the maintenance costs by 25% (£4,200 pa). This work comprised Phase 1 of a planned Heating overhaul costing £100,000. In addition, all the boilers for the remaining apartments were replaced over a period of 3 years. The Clothworkers' Foundation generously pledged a grant of £20,000 towards Phase 1. 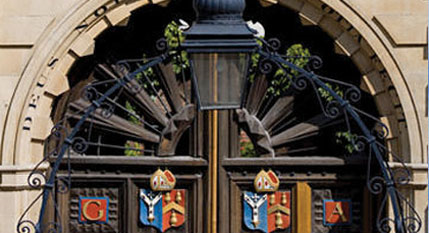 If you would like to support our work and enable Abbot's Hospital to continue, please click: Support Us or contact Ian Bowler, The Master, on master@abbotshospital.org or on 01483 455591.

In 2004, after nearly 400 years of continued use, it became apparent that the Grade 1 listed building and many of the historic artefacts at the Hospital were in urgent need of conservation and restoration.

In addition, 19 units of accommodation (including those built in the rear garden in 1984) required upgrading to ensure that they met the standards required for modern elderly living.

From 2005 to 2010 more than £500,000 was raised from grant giving bodies and charitable trusts enabling the following work to be completed:

In 2015 a Quinquennial Survey highlighted the need for many areas of the old building to be repaired and restored. Most of the work is to brickwork and repointing, but the roofs and windows also need attention. The total estimated cost is £555,000 and a phased plan, costing in the region of £100,000 per annum, has been produced.