Abbot’s Hospital has celebrated 400 years of its community in the heart of Guildford.

Whilst the first brick was laid in 1619 and the building’s 400th anniversary marked in 2019, 1622 was when the first residents moved into the Hospital. 400 years ago this year they established the community that brought the building to life and that continues to flourish today.

In a service of celebration at Holy Trinity church in Guildford, the Revd Jonathan Hedgecock gave thanks for ‘the thread of constancy, consistency and continuity that has run throughout 400 years of history in the life of Abbot’s Hospital’ – a community living together in ‘mildness and love’, reflecting George Abbot’s instructions. The four centuries of Abbot’s Hospital’s service to the people of Guildford are illustrated in the ceramic murals at the top of Jeffries Passage. Through all the changes depicted there, Abbot’s community has continued.

Looking to the future, the celebrations of this 400th anniversary year concluded with the planting in the Hospital’s garden of trees donated by Abbot’s governors. One tree marks the platinum jubilee of our late Queen Elizabeth II and is given added poignancy by her recent death. This tree was planted by Mr Michael More Molyneux, His Majesty’s Lord Lieutenant of Surrey. For the second tree, which marks the anniversary of the arrival of the first residents, the Lord Lieutenant was joined by two grandchildren of current residents, emphasising the community at the heart of Abbot’s across its history and into its future. 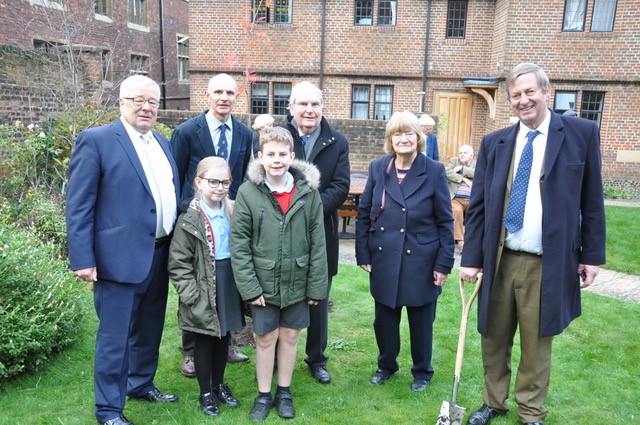 In the photograph, the Lord Lieutenant (on the right with the spade) and Jacob and Phoebe Keffler are joined by the Mayor and Mayoress of Guildford, Cllr Dennis and Mrs Mary Booth, Colin Mullis Chair of Governors and Ian Bowler Master of Abbot’s Hospital.

'George Abbot's Gift to Guildford' is our 400th Anniversary Film,  made by Chocolate Films, to help us celebrate and commemorate in 2019.

The subtitled version of the film is available to view here: