George Abbot was born on 29 October 1562, in the Parish of St Nicolas, Guildford. His parents, Maurice and Alice Abbot, were clothworkers and had 6 sons, of whom George was the third.

Each of the brothers achieved remarkable prominence; one became Mayor of Guildford, a second had a successful career at the bar, a third became Bishop of Salisbury while a fourth, Richard, was installed as the first Master at Abbot's Hospital. The fifth brother, Sir Morris Abbot, was a governor of the East India Company, Member of Parliament for the City of London and Lord Mayor of London in 1638.

George Abbot was educated at the Free Grammar School (now the Royal Grammar School, Guildford) before going to Oxford University where he subsequently became Master of University College, graduated as a Doctor of Divinity and served 3 times as Vice Chancellor.

In 1604 Abbot attended the Hampton Court Conference where a new English translation of the Bible was commissioned by King James I and as part of the 2nd Oxford Company of translators he worked on the Gospels, the Acts of the Apostles and Revelation.

Abbot's rise in the Church of England was rapid. A supporter of the puritan movement, he travelled to Scotland on behalf of the King to arrange a settlement between the Church of England and the Church in Scotland. Although this proved impossible, Abbot helped to persuade the parties to compromise and shortly after was appointed Bishop of Coventry and Lichfield, and became Bishop of London in 1610. A year later in 1611 he was enthroned as Archbishop of Canterbury.

Abbot's Hospital, or the Hospital of the Blessed Trinity, was founded by George Abbot in 1619 and received a Royal Charter in 1622. Tragically, in 1621 just before the building was completed, the Archbishop accidentally killed a gamekeeper while out hunting, an incident which was to affect him for the rest of his life. Although George Abbot received a full royal pardon the affair could not be forgotten, his increasing disagreements with the King saw his influence dwindle at court and he was not allowed to play a full part in leading the Church. Despite crowning Charles I in 1626, George Abbot was forced into virtual retirement and eventually died in 1633. 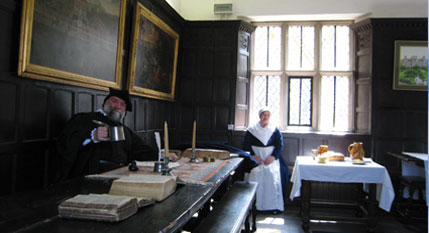 As Archbishop and a very rich man, George Abbot resolved to devote some of his wealth to benefit others and found his "affection leading me to the Town of Guildford, where I was born, and where my aged Parents lived many years with good report".

George Abbot had 2 objectives; to create work opportunities (Guildford was in a time of recession) and to support the elderly.

To this end he decided to establish a Manufacture and a Hospital. By 1618 plans had been completed for both schemes and the Half Moon Tavern on the High Street had been purchased for £350 with a property to the east of the site for £100.

The Hospital of the Blessed Trinity followed the model of the Whitgift Foundation, Croydon, started in 1596 by John Whitgift and was designed along the lines of an Oxford College complete with gatehouse, hall and Chapel using the finest quality materials and craftsmen.

In April 1619 George Abbot laid the first stone of the Hospital. Bricks and tiles were purchased from Cranleigh and timber from Chiddingfold was selected by the builder, Peter Warwick. Much of the preparation work for the building was done in Warwick's workshop at the bottom of South Hill (the continuation of which is now called Warwicks Bench). On Abbot's 60th birthday, 29 October 1622, the first residents moved into the Hospital which was granted a royal charter by James I.

The Manufacture (now the Old Cloth Hall in North Street) was built in 1629 as a venture to provide retraining skills for unemployed weavers from the woollen trade. Tools, equipment, a kiln and an instructor were brought in to instruct the workers in the production of linen cloth but the project was short lived. Despite later efforts to manufacture woollen cloth a series of problems including sickness and the Civil War resulted in failure and final closure by 1654.

The Brothers and Sisters

George Abbot had very firm ideas as to how the Hospital should be run.

The 12 Brothers and the 8 Sisters were placed under the care of a resident Master whose duty was to "rule and govern" with "mildness and love...otherwise with moderate severity". None of the residents could be married and all were to attend Chapel twice a day and to attend Holy Trinity Church opposite, on Wednesdays, Fridays, Sundays and Feast Days. Failure to attend Chapel resulted in public rebuke by the Master, a fine and ultimately, expulsion from the Hospital.

Each resident was provided with a single unfurnished room with a simple fireplace and was expected to contribute to the running of the Hospital. The men worked in the Kitchen Garden where fruit and vegetables were grown to supplement the Hospital diet, carried out manual jobs and kept the outside of the building clean. The Sisters cleaned inside, prepared and cooked food and did some nursing. One Sister was responsible for cleaning the Master's and Archbishop's quarters.

In addition to their simple rooms, coal, firewood and the distinctive Hospital blue caps and gowns made from Guildford Blue cloth the residents were given a weekly allowance of 2 shillings and 6 pence (12.5p). This sum was about half the typical wage of a farm worker, and would enable residents to buy a medium loaf of bread, half a pound of cheese, a pint of peas and 4 pints of small beer a day.